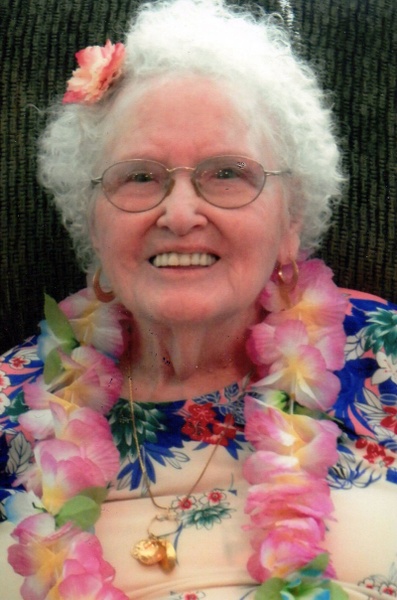 Winifred Jane Slaughter passed away peacefully in Roseville, CA on February 1, 2017 at the age of 98. She is preceded in death by her husband Jack Lionel Slaughter and her parents, Leo & Eathel Gross.
Winifred was born in Sacramento, CA on June 8, 1918. She grew up in Fresno, CA and graduated from Roosevelt High School in Fresno. She met Jack Slaughter while both were attending Fresno City College. They were married in 1939 and were together for 57 year until Jack's death in 1996.
Winifred is survived by her brother, Robert C. Gross of Cayucos, CA and her three daughters; Phyllis Jane Pickett of Palmer, AK; Karen Kay Keifer of Roseville, CA; & Jacqualin Lee Starr of Ventura, CA. She leaves behind seven grandchildren and eleven great grandchildren.
While Winifred (kindly referred to as "Winnie") was raising her children, she gave piano lessons in her home for about ten years. She also enjoyed traveling and made many trips to Arizona and New Mexico where she acquired jewelry made by Native Americans, for her turquoise business.
Winnie and Jack loved traveling in their 30' RV and made many trips across the US, Canada & Alaska. They also were part of an RV caravan that trekked across Mexico and New Zealand. Their travels also included Mediterranean and Caribbean cruises. Winnie loved deep sea fishing and used the opportunity whenever she could. Her biggest joy was fishing for salmon during her trips to Alaska.
Winnie lived in Fresno for 42 years until Jack was transferred by PG&E to Salinas, CA. They bought a home in Prunedale and lived there until 1996. After Jack's passing in December of that year, Winnie moved to Roseville to be closer to her daughter Karen and her two granddaughters, Krissy Ballard & Kerrie Sheffield.
The family is grateful to Somerford Place in Roseville for their kindness and compassionate care during the past two years.
The funeral service on Thursday, February 9th at 2pm, will be held at Heritage Oaks Memorial Chapel in Rocklin, CA. Her final resting place will be at The Garden of Memories Memorial Park in Salinas, CA where she will be interred with her husband Jack.
In lieu of flowers, please donate to the charity of your choice in honor of Winifred Slaughter.
To order memorial trees or send flowers to the family in memory of Winifred Jane Slaughter, please visit our flower store.