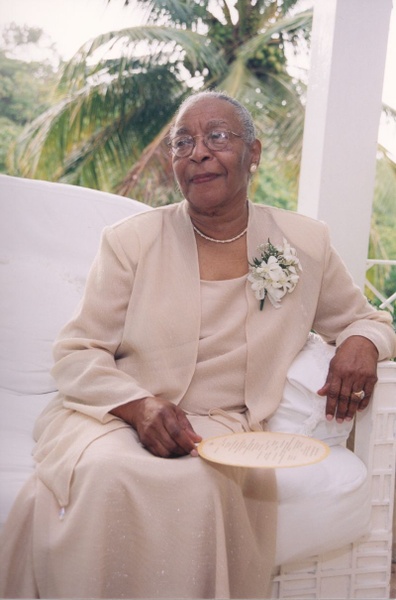 Willie Mae Brown was born in Campania, Georgia on December 29, 1924 to John Thomas and Lilly Belle Dorsey. She was the fourth of six children. At age seven she and one of her sisters were baptized in a stream outside Second Mt. Moriah Church. Since that day she's felt God's presence in her life.

At age 17, Willie Mae took a job at Fort Gordon Army base. It was there that she fell in love with a soldier named Charles Christian. They soon married and moved to New York City, where they had a son named Thomas. Willie Mae and Charles divorced,but remained friends. Willie Mae later met and married Ernest Brown, Sr. Of this union they had one son, Ernest Winston. The family moved from the Bronx to Hempstead, New York, joining their family of sixteen relatives within a three block radius. Willie Mae's home became the hub of daily activity for family and friends alike. She provided a haven of love, good food, peace, joviality and solid counsel. They enjoyed being part of the Mt. Herman Baptist Church where Ernest Sr. served as Deacon. Ernest was a loving and devoted husband until he passed away in 1995.

Soon after, Willie Mae moved back to Augusta, GA to be near her sisters. There they spent wonderful times reliving their childhood, providing life lessons and honing their skills in Southern Cuisine. The sisters enjoyed many church activities including watching the nieces, grands and nephews embrace the spirit of God. Her health waning, she relocated to California in 2010 to be near her youngest son. Willie Mae and her daughter-in-law's mother, Erma Guest, became roommates as they had been at the wedding of their children in Montego Bay, Jamaica.

Willie Mae will be truly missed by her sons: Thomas Christian (Iyobosa) of Albany, New York, Ernest Brown (Gayle) of Roseville, California. She is survived by siblings: Mary George Jones and Katherine Frails (James) of Harlem, Georgia and grandchildren: Iguodala and Uhunoma Christian of New York. She leaves behind a host of nieces and nephews both in America and Africa. Willie Mae is preceded in death by husbands, Charles Christian and Ernest Brown Sr. and her beloved siblings James Thomas, Verdell Thomas Harps and Jackie Thomas.
To order memorial trees in memory of Willie Mae Brown, please visit our tree store.