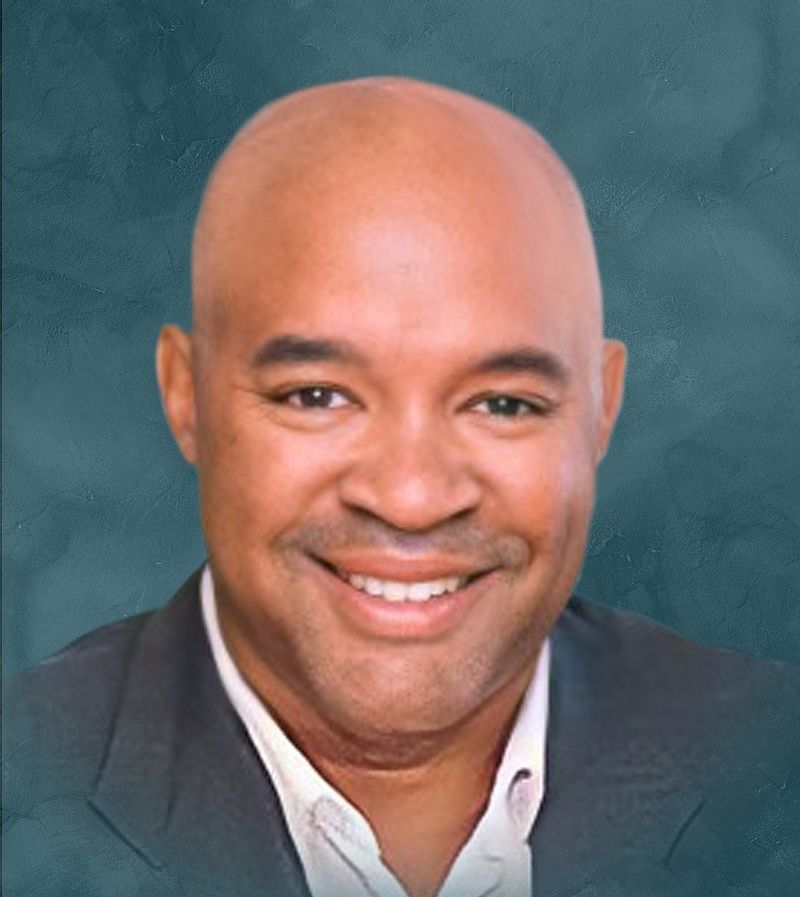 Be sure to view Ross' Tribute Video by clicking on the "Tribute Video" icon above. The recording of the military honors at the Sacramento Valley National Cemetery has been added to the end of Ross' tribute video.

Ross Bruce Cheairs, III (family name Trey) left this world far too soon on July 4, 2021, of a sudden heart attack. He was a beloved husband, father, son, brother, uncle, friend, and coach. On June 19, 1969, he was born at Meharry-Hubbard Hospital in Nashville, TN, to Ross Bruce Cheairs and Eleanor Patricia Banks Cheairs of Memphis, TN. The Cheairs family spent a few years in Buffalo, NY, where daughter Katherine Ann Cheairs was born before relocating to the metro Atlanta area in 1976. Ross demonstrated excellence in academics and athletics from an early age while a student at McLendon Elementary School in Decatur, GA. He was in the Discovery program for gifted and talented students. In addition, he participated in many extracurricular activities that included Swim Atlanta and the Atlanta Shell Club. His musical interests included guitar and violin, and he achieved purple belt status in karate. Ross attended Shamrock High School in DeKalb County, GA. He received many accolades and awards, including the National Junior Honor Society, The National Beta Club, and the Georgia Southern College Minority Junior Scholastic Award. Equally impressive was Ross's passion for team sports. He played varsity tennis and ran cross country track and field, where he regularly tethered a visually impaired student for practices and meets. After receiving admittance to several prestigious colleges and universities, Ross accepted an appointment to the United States Naval Academy in Annapolis, MD, where he majored in Engineering and graduated with the Class of 1991.

During his time at the Academy, Ross served as a Platoon Commander in the 8th Company and participated in various athletic pursuits, including lightweight football and basketball. He would go on to serve with distinction in the Navy, earning his gold wings as a Naval Aviator and qualifying as Aircraft Commander in the SH-60F Seahawk based out of Naval Air Station North Island in Coronado, CA. Throughout his Naval career, Ross served at various locations at sea and around the globe, including multiple Pacific deployments and as an Executive Officer of a forward-deployed unit in the Middle East. Ross was a member of the Navy Helicopter Squadron HS-8 from 1995-1998 and participated in 2 deployments onboard the USS Nimitz, including a 1997-1998 'Around the World' cruise beginning in San Diego, CA, ending in Norfolk, VA. Ross subsequently joined HS-10, where he served as a Fleet Replacement Squadron Instructor Pilot preparing new and returning pilots for their respective combat deployments. In total, Ross flew 1,700 hours, including 700 hours as Pilot in Command on over 500 sorties. These sorties consisted of operational and training missions such as Combat Search and Rescue, Night Vision Goggles, and aircraft carrier battle group operations. Ross left active duty in 2001 and continued to serve in the Navy Reserves until retiring as a Lieutenant Commander. Upon leaving active duty, Ross enrolled at the Anderson School of Management at UCLA and graduated with an MBA in 2003. After graduating from UCLA, Ross worked in real estate project management, financial analysis, and land acquisition in and around the greater Sacramento area for such companies as Morrison Homes, KB Home, Britannia Pacific Properties, and Richmond American Homes. Despite all his notable accomplishments, the thing he was most proud of was his family.

He met the love of life Elizabeth in 1999 while serving in the US Navy in San Diego. They married in the Summer of 2003 and started to build a family in Lincoln, Ca, where they have resided since. The center of Ross' world has always been family, and he and Elizabeth were proud parents of Alexandria (16), Brandon (14), and Anthony (11). Ross found joy in helping kids find their potential while coaching soccer, flag football, and basketball in the Lincoln community. He relished time with his family, taking trips, reading Star Wars books, was a loyal college football fan, and never missed an opportunity to cheer on the Atlanta Falcons and Braves. On the weekends, you would find him barbequing for his family and friends, hiking, watching sports and attending his children's pursuits. He loved most of all being a family man, building memories, traditions and the simple joy of raising a family. He leaves a legacy of leadership, a humble nature, loyalty, and acceptance for people for who they are.

Closed Casket Visitation: Sunday, July 25, from 2:00 pm to 5:00 pm at Heritage Oaks Memorial Chapel, 6920 Destiny Drive, Rocklin, CA 95677. This is an opportunity for you to stop by, pay your respects, and visit with the family.

Celebration of Life: Monday, July 26, 9:30 am at SS. Peter & Paul Catholic Church, 4450 Granite Drive, Rocklin, CA 95677. For those who are unable to attend, this service will be livestreamed. Here is the link to the livestream: https://youtu.be/wjemakVEEC8.

Funeral Procession: Following the service, there will be a funeral procession with a motorcycle escort from the church to the cemetery.

Interment with Military Honors: Monday, July 26, 12:30 pm at the Sacramento Valley National Cemetery, 5810 Midway Road, Dixon, CA 95620. Guests at the national cemetery should arrive no later than 12:15 pm. There will be a caravan from the entrance of the cemetery to the pavilion.

We want to invite everyone to come to the reception to celebrate Ross' life. This will be a time to gather and connect. There will be an opportunity for those who wish to share a story or memory. Lunch will be served.

From Church to Cemetery with motorcycle escort