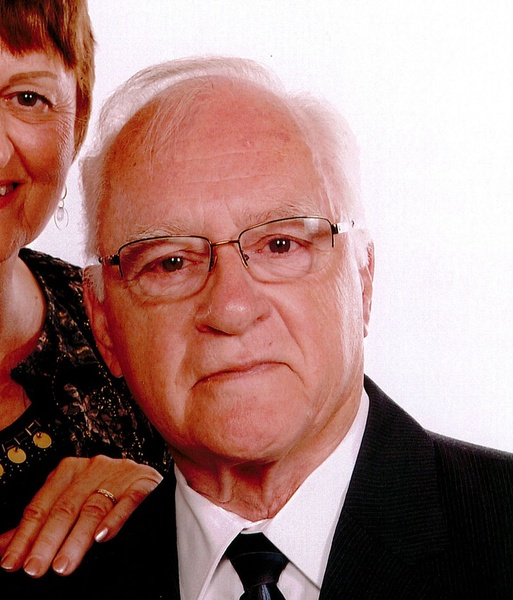 Ronald (Ron) L. Johnson, born February 1, 1940 in Batavia, NY went peacefully into the arms of his Savior on August 25, 2015 after a long courageous battle with Multiple Myeloma. He was the beloved husband for 53 years of Donna and loving father of Melanie. He also leaves sisters, Ardyth Mendez, Carol Tirada, Ardella Cruz, a brother Norman Johnson and many nieces and nephews.
Ron often related his experiences of growing up in upstate New York near the small town of Holly. When he was still a boy, he moved in with a farmer who taught him the jobs that needed to be done around the farm. He quickly took on the tasks that normally would be done by an adult. Ron often related his experiences of milking cows, bailing hay and trudging through the snow between the house and the barn. While in high school Ron had a lead role in a high school play and won an award for best actor. This left an indelible positive impression on his life.
After one year, Ron was reassigned to Mather Air Force Base here in Sacramento. While at Mather, Ron met two men that changed the course of his life. One was Marv Ladner and the other was Roy Jerue. These men led Ron to the Lord and discipled him for the next several years. Marv invited Ron to attend Arcade Baptist Church where he met Donna, and as they say the rest is history.
As a school Principal until 2000, when he retired after 36 years in San Juan Unified School District, Ron would sacrifice part of his summers to fix up each school he served at, painting, moving walls or installing new sprinkler systems to keep the lawns green. Every school Ron served as a Principal benefited from his carpentry or painting skills. If you went out to dinner with the Johnsons you would have to insist on paying for your portion of the tab. Ron was always generous, not only with his money, but in giving his time.
Ron was one of the most giving persons we have ever known. When Bayside Church was being built in 2004, Ron volunteered to help install the doors. After one of the carpenters showed him how to do one door, Ron worked with a team to install the rest of the doors. These were not ordinary doors like you would find in your home; these weighed over 90 pounds each. Each day they would install the hinges, bore the holes and install the locks. Over the next couple of months they installed well over 250 doors before all the doors were completed. He and Donna also served coffee and snacks between services for several years.
He and Donna loved to travel and cruising to all 50 states and many countries. They especially loved traveling with friends. He was a Godly man, devoted, generous, compassionate, loving and a faithful servant.

Interment will be at Sacramento Valley National Cemetery in Dixon, California. In lieu of flowers, donations can be made in his name to Bayside Care Connections.
We will miss you greatly until we meet again in Heaven with our Lord and Savior.
To order memorial trees in memory of Ronald L Johnson, please visit our tree store.