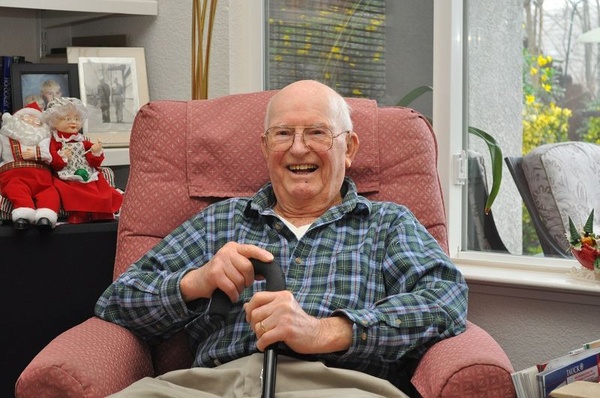 Richard was born Richard Allen Guth on September 27, 1923. He was born at home on the farm that his parents, Arthur and Martha Guth owned with assistance from the neighboring women. The family lived on the farm for many years during the time that Richard and his siblings, Gordon, Kathy, Virginia and Shirley grew up.

After graduation from Lafayette High School in 1942, Richard enlisted in the US Army, becoming part of the 2nd Armored Division. He fought in the African, Sicilian and European theaters of war and was awarded a Bronze Star and Silver Star, purple heart and multiple campaign ribbons. Dad was wounded during the Battle of the Bulge, and was sent back to England for recuperation. Eventually, he rejoined the 2nd Armored Division as they advanced into Germany and Berlin.

Upon his separation from the Army, Dad found himself back in Colorado doing all sorts of different types of jobs to stay employed, and ultimately settled on being a diesel mechanic. It was in Colorado that he met his first wife, Shirley. Together, they would have two daughters, Lois and Janet. Some time after their divorce, Lois and Janet went to live with their grandparents, Arthur and Martha Guth who lived in Golden, Colorado. Dad moved out to California to begin the next stage of his life.

Eventually, he became a professional truck mechanic, a skill he learned while in the Army. Eventually, his daughter Lois came to live with him after she graduated from high school in Golden. The cost of a college education was better here in California. Upon graduating from Golden High, his daughter Janet also came out to live with him, as well, and they lived in Castro Valley until Janet was married and Lois had graduated from California State University at Hayward with a teaching credential. After 30 years of working for various truck lines, Dad retired in 1985, while still living in Castro Valley, California.

When Lois came out to live with Richard, they began looking for a church home, eventually settling at Redwood Chapel in Castro Valley. As a result of the teaching and sermons of Pastor Sherman Williams at Redwood Chapel, Dad trusted in Christ as His Savior. Since that moment, His faith in Christ's redeeming work on the Cross has been a strong foundation and guiding principle for his life.

One of the very effective ministries that Dad had after becoming a Christian was visiting the elderly and incapacitated men and women in care homes. He would faithfully make the rounds every week of 'his' facilities, and was instrumental in bringing many into a saving relationship with our Lord Jesus Christ.

In 1975, Dad met Cecille George at the church they had been attending in Hayward and they were soon married. The two of them were together for 38 years, until Dad went to be with the Lord on 5 July, 2013. Cecille became a ministry partner to Richard for 10 years, faithfully visiting the sick and the laid up to encourage them and share the Gospel with them.

Dad and Mom moved from Castro Valley out to Manteca in 1993, where they would be more centrally located for all the family, and have a more cost-effective living situation out of the Bay Area. During their years in Manteca, their relationships with Cecille's children, Sam, Francine and Frank, grew quite strong. Francine's husband, Robert, spent many hours with Dad helping home and at their church facility, First Presbyterian Church, doing maintenance. Richard and Robert enjoyed many hours fishing together at the various lakes, reservoirs and rivers available to them.

In 2002, Richard and Cecille moved up to Rocklin, which is the current residence. Dad & Mom immediately began attending and became members of Adventure Christian Church where they were involved in the '55 Alive' group and the greeting ministry on Sunday mornings. Cecille plans to continue this tradition.

Richard's relationship with the Lord and his family were the most important things to him. He generously added others to his 'family'. These additions included his sons-in-laws and daughters-in-law, as well as the lonely and the disadvantaged. We will all miss his humble, generous, and loving spirit as well as his great sense of humor, listening ear and wise counsel. He had a wonderful way of praising his Lord in prayer and intercessory prayer was a daily habit for those around him. He has simply moved from praising the Lord here, to doing so in the presence of the Lord.