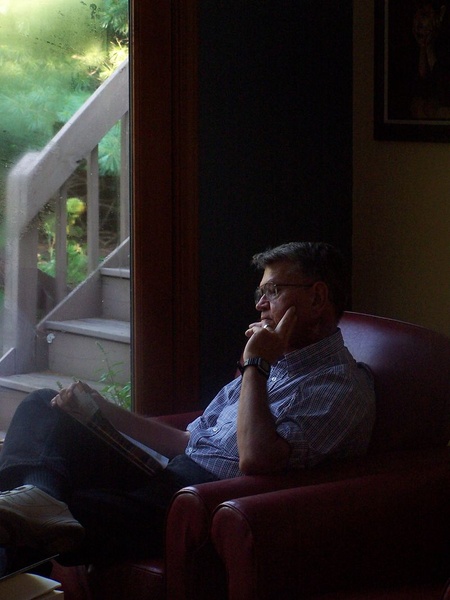 Raymond Walter Grabb (Ray) was born in Greensburg, PA to William L. and Ruth (Houston) Grabb. Ray's parents met while roller skating, a passion they shared with their children and which Ray embraced both as a child and as an adult. Like his father, Ray met his wife Bernadette at a skating rink where he was employed as operations manager.

After serving six years in the U.S. Air Force, Ray remained in California and had a number of jobs including American River Roller Odyssey, Aerojet, PepsiCo, and Gold Country Management. Ray always enjoyed working and made friends with management, staff and customers.

When he was not working, Ray's church, family, and friends filled his life. He was baptized in May 2009 at Bridgeway Christian Church in Rocklin, CA. where he participated in the men's Forge groups and retreats. Here he was at home.

After his diagnosis and first round of treatment, Ray joined the cancer support group at Kaiser Permanente in Roseville in an effort to encourage and help others with the same issues he was facing. He was proud to be one of the first members of the head and neck cancer support group at Kaiser Roseville and was an inspiration to others within the group.

Ray went through life building long-term relationships. Friendships were important to him and he maintained friendships from his days in the Air Force, from each of his jobs, from his churches, and from his hobbies. Ray had a gift for camaraderie, an easy irreverent way that made you immediately comfortable. He was always first to offer help, first to give you whatever you needed. His wry sense of humor made him easy to enjoy, easy to love. Everyone knew him; everyone loved him. The cashiers at his favorite grocery store all knew him by name and loved to see him coming. His wife was Mrs. Ray.

Ray didn't dabble at things; he jumped in with both feet and got totally involved. His interest in woodworking became a passion and he created gifts and toys for family and friends, and even made picnic tables which could be found in Old Sacramento for many years. Because of his interest in railroading he became a docent at the California State Railroad Museum during his cancer treatment. Both of these interests afforded him more new friends. Even throughout his long-term final illness, his nurses and doctors became more than medical practitioners; they became friends who learned to appreciate his great strength, commitment, and kindness.

This site allows me to list two charity options. You'll see them on the right: Bridgeway Foundations (our church) and CaringBridge, which many of you are familiar with. Ray also wanted to add California State Railroad Museum (csrmf.org), or any charity of your choosing.
To order memorial trees in memory of Raymond Walter Grabb, please visit our tree store.