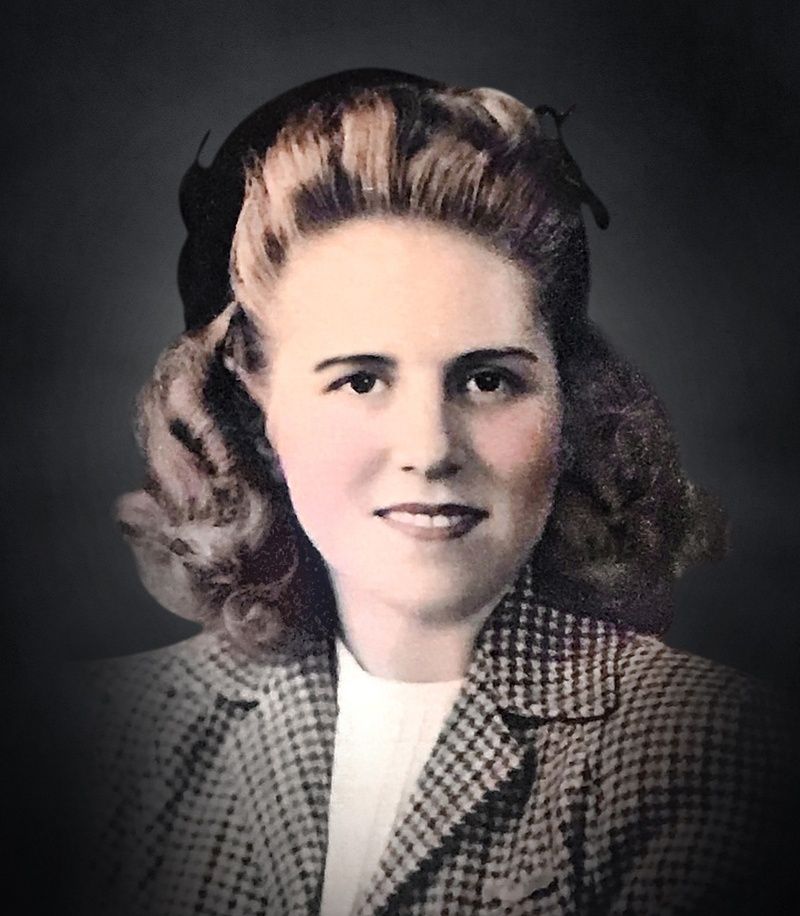 Marie's memorial service will be streamed live on Friday, January 22, 2021, at 11 a.m. Pacific Time. Here is the link to view the live stream: https://video.ibm.com/channel/KLAYx4UPEcj.

Marie Bridges Rushing James of Rocklin, CA, a devoted wife, mother, grandmother, great grandmother, and friend passed away Tuesday, January 12, 2021, at home in Roseville at the age of 95. Marie was gracious, strong and independent and did not surrender easily to the indignities of dementia and age. Marie was lovingly cared for by the caregivers at Broadway Senior Living and Bristol Hospice in Roseville during the last two years of her life.

Marie was born in Ardmore, Oklahoma, to William and Lila Bridges in July 1925. Marie was one of five children, three died in infancy, leaving Marie and her brother Robert H. Bridges born August 1916. Marie experienced the Great Depression. Marie noted that her mother was "a Christian in the true sense of the word and I owe my faith in God to her!"

Marie was known for her memory and loved to speak of her journey. Marie recalls she was introduced to politics during the Franklin Delano Roosevelt presidency at the tender age of seven. Marie's older brother Robert joined the Oklahoma National Guard, it was "my first love of guys in uniform even at that tender age". She recalls being aware of Hitler's rampage and remembers how frightening he sounded on his speeches that she heard over the radio. Marie taught herself to drive in 193 8 in her brothers 193 2 Chevy while he was at Summer Camp with the National Guard.

Moving on to the summer of 1940 Marie recalls "my life was to change big time", she met "a very young airman" from Springer, Ok. His name was Robert Jack Rushing. From Marie's diary: "We decided in the summer of 1942 to marry secretly since Ardmore High School, at that time, had a policy of 'no war brides to attend school'. Well, by the time I listened to that speech by the principal, I was already Mrs. Rushing, but we managed to keep it under wraps. Well, it did not seem to work". Marie followed Bob by bus to every base to which he was assigned, found her own apartment generally speaking a shared situation with a common bathroom. Remember, there were no cell phones, Marie had to find the USO for help locating her Bob at each port of call. Marie followed from Dallas Texas, Perrin Field, Texas; San Antonio; Bonham, Texas; Lubbock, Texas; Clovis Air Force Base, New Mexico just to name a few.

Marie went on to give birth to three sons while following Bob as he advanced in his career. As the war was winding down, Bob chose to remain in the Air Force
as a pilot, Bob was stationed in Memphis, and they were expecting their first born, Steve. Marie's mother came and spent about a week or two and then Marie was on her own with her newborn son Robert Steven born on December 31, 1945.

In 1946, Marie tells of the war winding down and pilots being out of work when Bob made the choice to go to meteorology school. Orders came through and they were off to Illinois. In 1947, Bob was recalled to active duty and sent to Fort Worth, Texas, as a Captain. Fort Worth agreed with Marie where she gave birth to Jan in September of 1948, and Larry in January of 1952, and it was Ft. Worth where the Rushings purchased their first home.

Unfortunately, Marie's Diary ends here, but we all know the family travelled to Marocco from 1954 and 1955, returning stateside to Montgomery, Alabama, before finding their way to California.

May 20, 1975, Marie is widowed living in Santa Clara. Marie was very active in the Church of Christ where some of Marie's friends worked for PacBell. Marie met Kenneth (Ken) James through friends as he too was employed by PacBell. Marie and Ken were married November 19, 1977. Marie now embraced Ken's boys, Ken, Jr., and Bill as her new blended family.

Marie's daughter-in-law, Linda, shares the following: "Young Ken and I always thought Marie was Ken's reward for staying in a difficult marriage to help his wife. Ken met Marie and after several months of being a widower he asked Marie for her hand in marriage. Marrying Marie made a world of difference in the James family. Thankfully, Marie was the wife, mother, and grandmother the family needed as they began a new chapter of their lives".

Marie and Ken loved to travel, Marie and Ken travelled to Australia, New Zealand, Fuji, and Hawaii just to name a few places I found in Marie's passport. Marie and Ken also travelled by car and train throughout the United States. Marie loved train travel as well. Marie loved her church family and was active in the Church of Christ in Loomis, and she looked forward to Supper and Bible Study every week with her church family. Marie had various jobs outside of the home but her "number 1" job was housewife which husband Ken tagged as "Domestic Engineer". Marie was interested in genealogy, and she was known for her Fall harvest from her mandarin trees, yummy!!! Marie loved to talk, she often said she "lived on Memory Lane" she absolutely loved to talk about her journey. Marie liked to sing, she was an avid Dodger fan, and Marie loved chocolate.

Marie had lots of friends, but she had one who stands out and he is Mike Straw. Marie and Mike have been friends for years, and at some point, during their friendship, he made a commitment to Marie. Mike has been by her side standing by his commitment through this journey to meet her maker.

Services for family, due to COVID19, are limited in size, and all attending must wear a mask. Services will be held at Heritage Oaks Memorial Chapel on Friday, January 22, 2021, at 11 a.m. 6920 Destiny Drive, Rocklin, CA 95677. The Service will be followed by internment at Newcastle, Rocklin, Gold Hill Cemetery

The memorial service will be streamed live, check the website for details at https://tributes.com/mariejames. Condolences may be sent to the family by visiting the website above and signing the guest book.