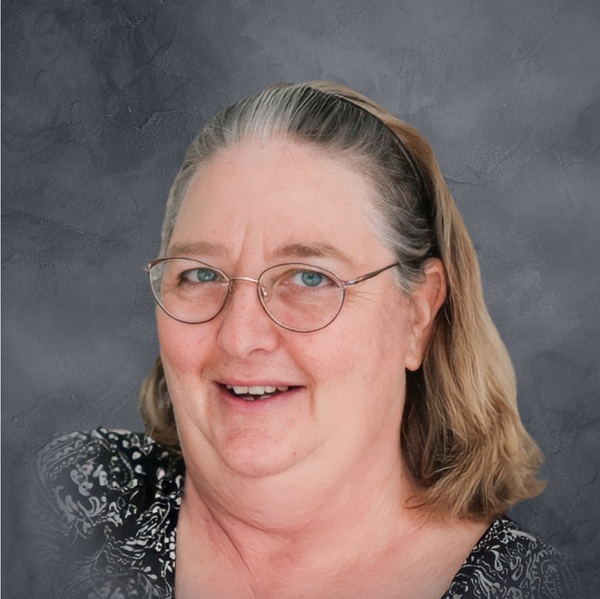 Hand delivered by a local florist

Lori was born Lori Jeanne Leffler in Greeley, Colorado in 1959 to Vicki Sue Tormey and father Jim Leffler. After spending some time in Oakland, California, she moved to Eureka, California, in 1970 with her mom Vicki and dad Charles Calvin Mills. She grew up with brothers Jim Leffler, David Leffler, and Michael Mills, and sister Laura Lee Belt.

After Lori graduated from Eureka High School, she married Mike Gladding, and went on to pursue her lifelong love of early childhood education while starting her own family. The family moved from place to place, along with Mike`s postings in the Navy, living in California, Washington, and Rhode Island before settling back in Eureka in 1988, and then moving to Bridgeville, California in 1994. Lori raised her five children, Sara, Crystal, Steve, Jeff, and Molly, in Eureka and Bridgeville, and was both a wonderful mother and an inspiring role model, caring for her children and her community. When she divorced in 2010, she moved to Sacramento, California, then to Magalia, California, working as an educator traveling throughout the state and enjoying the opportunity to be near her daughter Crystal and her children, and frequent visits to Eureka to see her daughter Molly. After being displaced by the Camp fire, and following her diagnosis with and initial treatment for breast cancer, she moved to Huntington, Massachusetts, where she was able to spend time with sons Steve and Jeff and their children, and to stay with Jeff and his family through her time in hospice care.

Lori spent her life in the field of early childhood education, working at first at preschools, later with the Humboldt Child Care Council, then going on to become the Program Director for the Eureka City Schools Teen Parent Program, and moving into professional training and teaching college courses through the College of the Redwoods, California State University at Sacramento, and Pacific Oaks College. She touched many lives in all of these roles, and is especially remembered for her years of supporting pregnant and parenting teens as they finished high school and planned their next steps. She returned to school several times an adult, earning her BA in Human Development from Pacific Oaks College while here children were young, and her MS in Education from Walden University while also working and parenting.

Lori was forever learning new skills and making things. Her favorite crafts included sewing, embroidery, and beadwork, skills she passed along to her children and grandchildren as well. She loved spending time outdoors, and in addition to traveling for work, she enjoyed visiting parks with friends and family, taking up kayaking and sailing. When her oldest, Sara, moved to Japan, she added international travel to her life and made several visits, spending time with her grandkids and visiting the sights. She was also an active volunteer, keeping busy with teaching cooking and crafting workshops through 4-H while her kids were young, and joining the volunteer ambulance team with Southern Trinity Area Rescue when she lived in Bridgeville, as well as putting her love of thrift shopping to use to send a steady stream of supplies to families, child care centers, and disaster relief programs in need of a little help.

Lori is remembered with love by all who knew her. Her home and her heart were always open to anyone in need, and her presence in our lives was a true gift. She is preceded by her mother Vicki, sister Laura, and brother Jim. She is survived by her dad Chuck Mills, father Jim Leffler, brothers David Leffler and Mike Mills, her children and their partners, Sara and Shuzo Yoshihara, Crystal Leffler and Jed Smith, Steve Gladding and Becca Schafer, Jeff and Stephanie Gladding, and Molly Gladding, and by her grandchildren Haleigh, Rinka, Ai, Emmalyn, Paige, Adelaide, Jillian, Calvin, Eliza, Colsyn, Nathaniel, and Charli.

To order memorial trees or send flowers to the family in memory of Lori Gladding, please visit our flower store.
Send a Sympathy Card

To order flowers, call Rocklin Florist at 916-624-1651. Visit their website at www.rocklinflorist.com.