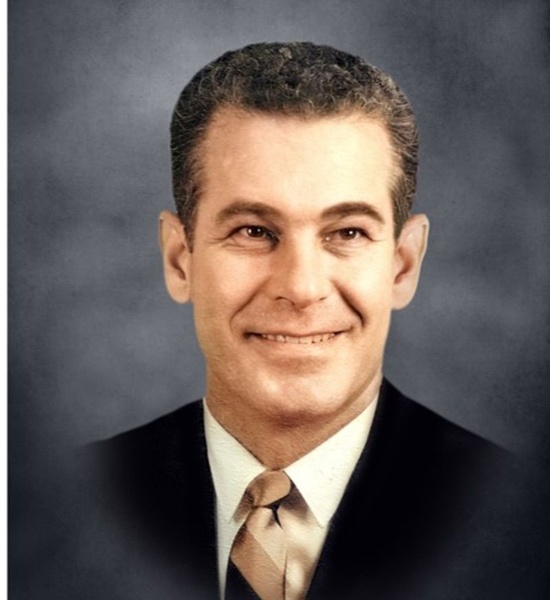 A patriot from the last of the "Greatest Generation" has left us. In the words of Tom Brokaw, "It was these men whose lives of duty, home, achievement, and courage gave us the world we have today."

It is with great love, respect, and deep sorrow that our family announces the passing of Joseph Frederick (Joe) Cullen on March 22, 2020 at the age of 95, from natural causes. His family was by his side at Kaiser Hospital in Roseville, California. It has been over a year now, and our hearts are still grieving and missing Joe. He was a true patriot and will be missed by all who knew and loved him.

Joe loved his country; he served in combat in World War II and the Vietnam War. He was on active duty during the Korean War.

Joe was born on January 29, 1925, in Casper, Wyoming, to Frieda Newcomb Cullen and Lawrence Hubert Cullen. He was one of four boys. His three brothers are deceased: Lawrence, Jr. (Larry) Cullen, Daniel (Dan) Cullen, and Rexford (Rex) Cullen. They grew up during the Great Depression. Joe remembers his Dad bringing home a candy bar on Friday nights and cutting it into four pieces to share with his four children.

Joe was a hard-working student at Santa Ana, California, High School and excelled on the swim team. During the summer, he and his friends would bicycle 12 miles down to the ocean for a day at the beach and then pedal home again.

His brother, Dan, was a B-17 pilot flying from England carrying out bombing raids over France and Germany during WWII. He was an inspiration to Joe.

Immediately following his graduation from high school, Joe enlisted in the Army Air Corps at age 18. He had always dreamed of flying and passed all the qualifications.

Joe eventually became a P-38 pilot, flying photo reconnaissance in the South Pacific. Before the days of satellites and drones, reconnaissance pilots gathered information about the enemy using a camera in the sky. Joe kept detailed memoirs of his time in combat.

After returning home, he entered Santa Ana Junior College before being accepted at the University of Colorado, Boulder under the G.I. Bill. He graduated with a B.S. in Mechanical Engineering in 1950.

Joe returned to the service in July 1952 and was selected for assignment in the Air Force Nuclear Weapons Program and was on active duty during the Korean War. He later served in Vietnam (1965-66), where he received the Bronze Star for meritorious service.

He was married in 1947 to the late Ruth Ann Lewis and is survived by their children: Joseph (Rick) Cullen, Jr., Margaret (Peggy) Obert, Dr. David Cullen, Dr. Steven Cullen, Timothy (Tim) Cullen, and the late Maureen Martin. He is a patriarch to 6 nieces, 4 nephews, 9 grandchildren, and 15 great-grandchildren.

Joe had a happy and fulfilling life, well lived. He was stationed in Germany, France, Vietnam, Japan, and across the U.S. He travelled the world and had many serendipitous experiences.

While stationed in Japan with the Headquarters 5th Air Force, Joe met Miss Louise A. Dixon, a teacher for the Department of Defense Overseas Dependents' Schools. They fell in love. After two years of courting, Joe and Louise married. Louise was the love of his life, just as Joe was to her. They were devoted to one another for 47 wonderful years of marriage and shared 50 years together. They made many life-long friendships with whom they still keep in touch since their days in Japan over 50 years ago.

Joe retired from active duty in March 1974, after 31 years of reserve and active duty time. He and Louise built their first permanent home in Rocklin, where they lived for 42 years. They had one child, Nathan Joseph Cullen.

When Joe retuned to civilian life, he worked for Sacramento County as a Mechanical Engineer. It was a convivial group of co-workers and the engineers helped Joe draw up the plans for his dream home. Even after retirement, they would go out to dinner often, to continue their friendships and have fun together.

Joe joined the Boy Scouts and attained the rank of Eagle Scout in 1942. Many of the principles and teachings of scouting were exemplified throughout his life. He returned to Scouting in Rocklin and served as an adult leader in Troop 29. He also helped establish a new Troop, Troop 349. He was awarded the Silver Beaver in recognition for his volunteer work. He accompanied the scouts for a 50-mile hiking trek through Lassen National Park at the age of 67.

He was a life member of the Rocklin Kiwanis and served for a time as president. He was given the honor of Kiwanian of the Year for his dedication to helping the children of his community and the world. His friends have been a wonderful support to him and Louise.

Joe had a wonderful life journey. In his travels, he met many fascinating people. His friendships were many and lasting. He will be missed by all his family and many friends. Joe will be remembered for his quick wit and warm sense of humor. He always had a ready joke to put a smile on your face.

He enjoyed morning coffee klatches with friends, the Rocklin Gourmet Couples, Boy Scouts, camping, his Kiwanis family, gardening in his yard, telling a good story, travel, spending special occasions entertaining with his family and friends; and most of all, sharing his life with Louise in love and joy.

Many thanks to his wonderful caregivers, they took such good care of Joe.

Friends of Joe, please celebrate his life at his Memorial Service when we can all be together again. The date is Saturday, September 11, 2021 at 11:00 A.M. in Heritage Oaks Memorial Chapel - 6920 Destiny Drive, Rocklin. At his service, military honors will be held. They will be followed by a luncheon at the Chapel, and later an Open House to celebrate his life. If you plan to attend the luncheon following his service, please call in your reservations now to 916-791-2273.

His cremated remains will be interred at the Sacramento Valley National Cemetery in Dixon and also at Newcastle Cemetery near Rocklin.

In honor of Joe, a memorial contribution may be sent to Rocklin Kiwanis Foundation, 2351 Sunset Blvd., Suite 170-210, Rocklin, CA 95765 or to Boy Scout Troop 349, Parent Committee Chairman, Howard Itow, 3700 Jennieke Ct., Rocklin, CA 95765, or to a charity of your choice.
To order memorial trees in memory of Joseph Frederick Cullen, please visit our tree store.