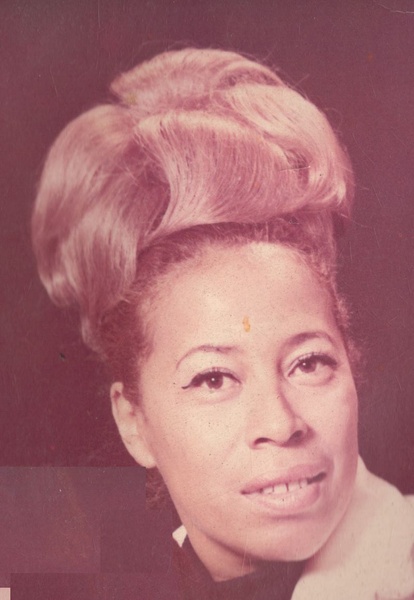 Erma Trude Guest was born in Homewood Alabama, traveled the world and has been a resident of the North Sacramento area since 1970. She was the third eldest of twelve children and accepted Christ at an early age. She was preceded in death by husbands, William Atwell King and Cleo T. Guest, son Cleo Tyrone Guest Jr., her sisters, Sylvia, Portia & Paula Montgomery, her parents, Edward Perkins Montgomery, and Queen Ester Montgomery.
Erma married her first love, William Atwell King in March 1948. Of this union one child was born, William Atwell King Jr (WAK). William Sr., died in service to his country in the Korean War in 1951.

Erma joined the US Armed Forces September, 1951 where she met and married Cleo T. Guest in Hartford Connecticut on November 12, 1953. Of this union two children were born, Glynis (Guest) Jensen and Gayle Guest-Brown. She and Cleo enjoyed two tours of duty in Frankfort and Wiesbaden Germany where their girls were born. After Germany, they were deployed to Springfield, Illinois and Biloxi, Mississippi. When Cleo deployed to Vietnam, Erma and the girls moved to Bessemer, Alabama.

She loved going to work each morning and enjoyed several jobs from teaching school, in Wiesbaden, to benefits administration, AT & T. In keeping with the family business ownership tradition, her crowning career joy was as proprietor of The Guest House (elegant women's fashions) at Birdcage Walk, Citrus Heights, CA for fifteen years.

Erma was a fun seeking and fearless. Her positivity and warmth transcended culture and race. She was very open, accepting of others and outspoken. She studied classical piano at Dillard University and played Mozart and Beethoven fluently. Erma had a notable sense of style and flair which could be seen in her fashion, her homes and cars. She loved people and loved bragging about her children and grand-children. There were no strangers, she greeted everybody warmly with "Darling". She could be found grilling BBQ ribs, poolside, in the backyard, with drink in hand many weekends.
Erma is survived by and will be dearly missed by her Children(3);, William Atwell King Jr.,(Shirley), Glynis Jensen (Peter), Gayle Guest-Brown(Ernest), Siblings(8); Julius Montgomery, Brunetta Hutchinson, Doris Cook, Artney Turner(Herman), Edward Montgomery, Jr., Carl Montgomery, Rita Poole and Holly Montgomery, Grand-Children (9), Keith Lamotte, Jr., Ryan King, Adam King, Leah King, Noah King, Jennifer Jensen, Peter Christian Jensen VI, Katherine Jensen, Sarah Jensen and a host of nieces, nephews and friends.
To order memorial trees or send flowers to the family in memory of Erma Trude Guest, please visit our flower store.