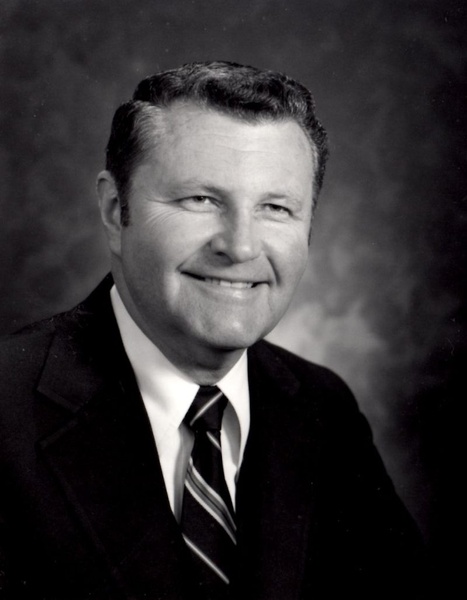 Elmer George Haskin, Jr. was born in Ukiah, CA. on Dec. 12, 1927 to Elmer Sr. and Josephine. Haskin, He attended schools in Arcata and Fortuna.

Elmer began his life-long service to the community and the country as an aircraft mechanic in the air arm of the U.S. Marine Corps in El Toro back in1946. Following his discharge from the service, he attended Humboldt State University and the University of Southern California, earning a BA in telecommunications. He was also was a spirited member of the Trojan marching band and had his own musical trio. He then joined Open Road Productions in Los Angeles as a cinematographer, film editor and producer. He also worked for radio and television stations in Oregon.

Haskin's lifetime of exceptional career achievement and civic leadership began at the North Coast's first TV station, KIEM-TV. In 1954 he joined this CBS affiliate in Eureka, where he worked for the next 29 years, first as an announcer, cameraman and producer while also conducting on-air interviews, then as regional sales manager before being named Vice President and General Sales Manager in 1978.

During this time, Elmer took up flying seriously and met a former naval carrier pilot who ended up giving him his flight exam. Later, that pilot decided to run for Congress and Elmer helped U.S. Representative Don Clausen win the seat. He worked for Representative Clausen on a part-time basis in the district, often flying to event from the Golden Gate to the Oregon border to represent him. He worked for Clausen for the next 20 years.

In 1956 he married Mary Harris in Eureka, where they continued to live and their two sons were born. During those years Elmer's active community involvement included membership in the Navy League, Masons, San Francisco Press Club, the Eureka Chamber of Commerce and Civil Air Patrol. His eclectic interests also included service as chairman of the Humboldt County Forestry Committee, director of St. Luke Manor, and chairman of the College of the Redwoods Aviation Advisory Committee.

In 1983, Haskin moved the family to Alameda to work as a division director for the federal General Services Administration on Market Street in San Francisco. There he managed general procurement, consolidation and fleet logistics for 31 western field locations.

Elmer enjoyed building, restoring and flying his many plane, especially his Bonanzas. Aviation was always a central and valued part of his life. He was also an honored member of the Sacramento Sheriff's air squadron.

Retiring to Roseville in 1995, the couple enjoyed traveling extensively, playing golf and especially spending time with grandchildren. For 38 years Rotary Club played a prominent role in Elmer's life – serving on the San Francisco Board of Directors and as program chair for a few years, and often saying that Rotary "allowed the opportunity for both great service and great fellowship."

After the passing of his beloved Mary in 2010, he met and married Ann Bowlan. They attended church together, and he grew in his faith. His great love of life, combined with his enduring love of music, aviation and especially of broadcasting and politics, will long be remembered and greatly missed by family and friends.
To order memorial trees in memory of Elmer George Haskin, Jr., please visit our tree store.