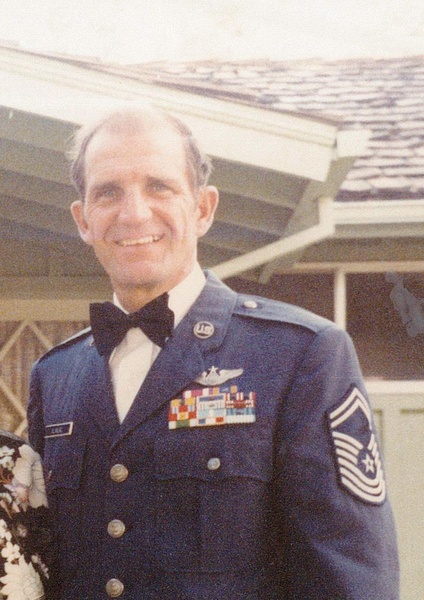 Ed was born in Chicago, Illinois to Fannie Kopatich Klanjac and Matt Klanjac, the second of three children, Eleanor, Ed and Beverly. The Klanjac Family moved to Centerville, Iowa where they grew up. Ed graduated from Centerville High School Class of 47'.

In 1976 Ed graduated from Rollins College in Florida with a bachelor's Degree in Accounting. He retired in 1980 as a Chief Master Sergeant (E-9) and went to work as an auditor for the Department of the Interior and later the Treasury Department.

Ed was a talented athlete. He played on the All Air Force fast pitch softball team for 2 years as a shortstop and first basemen. He played on every Base level softball team where he was stationed and played will civilian semi-pro teams including the Roseville Merchants where he tied for most home runs in Northern California. Besides softball Ed was a runner/ jogger. He usually ran 5 to 10 miles up to a half marathon in Sacramento. After retirement, Ed joined a military retirees golf group, playing several times a week. He was a volunteer scorekeeper for the Raley's Senior Goldrush Tournament for many years. He loved those golf greens!
Ed and Nancy were married on May 29, 1965. Lisa was born in 1967; Matt in 1970. They had many good times together. They camped along the was from Southern California to Patrick AFB, Florida and back. They drove to Seattle for Ed to act as father of the Bride for niece Susan's wedding to Jack Myer. They took Lisa and Josh to Maui. They cheered for the San Francisco Giants as they watched games on TV. They took many vacations with Nancy's twin sister Wendy and brother-in-law RD Bailey. Fun times included the giant redwoods, Alaska Cruise, Maritime Provinces, Colorado River trips, Panama Canal Cruise, Disneyland, Hawaii and many more. Ed made many people laugh with his great sense of humor.

Ed and Nancy were active in their church, Fair Oaks United Methodist Church where they belonged to fun fellowship groups and supported many projects and had many fine friends.

We wish to thank Fair Oaks Estates for their care and kindness, we also thank the caregivers of Oak Ridge Healthcare Center for taking wonderful care of Ed during his final illness.
To order memorial trees or send flowers to the family in memory of Edward Louis Klanjac, please visit our flower store.