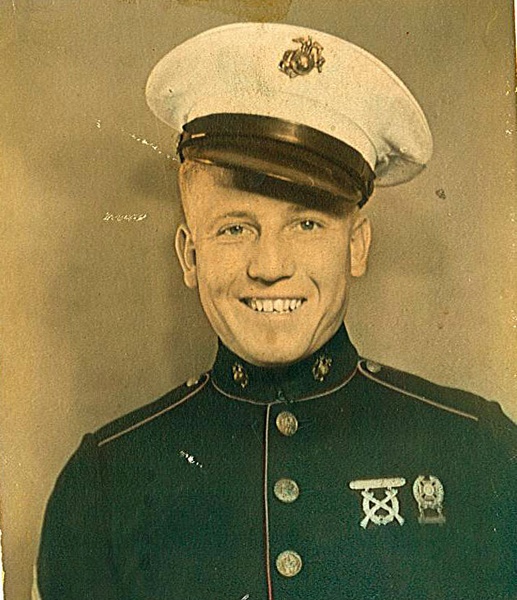 As it was with so many young men who had been through the Great Depression, Mr. Wood joined the Civilian Conservation Corp (CCC) in Montana. He was trained in excavation, planted trees, fought forest fires, and constructed miles of trails, bridges, campgrounds and buildings. He then returned to Texas where he enlisted in the National Guard of the United States and became a part of Battery 133rd Field Artillery.

He joined the Marines in December of 1939 at the age of 17 with high regards from Colonel Raymond Phelps. During his time in the Marines, he achieved the title of Master Sergeant; and had special qualifications as Aircrewman, Leading chief, Engineering Chief, Check Crew Leader, Supervisor of Training Flight Crews, and Line chief in the Flight Engineering Department. He did battle in July 1944-March 1945 in the Marshal Islands and Saipan. On April 2-May 1945, as part of the Marine fighting squadron 441, he participated in the invasion of Okinawa and the defense of Yontan Field while under bombing, artillery attacks and strafing, and special attack air-borne Japanese troops. Marine Fighting Squadron 441 was a fighter squadron that was activated during World War ll and fought during the Battle of Okinawa. They were nicknamed "The Blackjacks" and shot down 49 planes during the course of the war. He was a part of the support of Third Fleet Operations against Japan, between July and August of 1945. He served with the Sixth Army in the occupation of Yokosuka Japan from September 1945 to November of 1945.

He continued on to serve during the Korean war as a Master Sergeant in the Flight Engineering Division holding all of his previous titles and also that of Flight Crew Chief. He participated in numerous bombing missions into the war zones. After leaving regular duty in December of 1958, he remained in the Fleet Marine Corps Reserves for another 10 years. Thus a total of 33 years serving his country.

After leaving active duty, he became an inspector of the DC 8's for McDonald Douglas, and then he began his career as an Electro-Mechanical Technician for Federal Aviation Administration in Sacramento, California. He retired from the FAA as a Supervisor at the Kilgor station in Rancho Cordova, California with 25 years of service. He then moved to the Granite Bay, California area, but his service to his country did not stop. He was one of the charter members who started the Veterans of Foreign Wars Post 9869, served as Post Commander for two years, and served on the VFW Advisory Counsel in Auburn, California.

His family life mirrored that of his Military career: Devoted protector and provider. In 1942 Master Sergeant Carl Wood married the love of his life, Rebecca. Together they raised 4 beautiful children and enjoyed 11 grandchildren, 22 great grandchildren and 3 great-great grandchildren. He enjoyed fishing, camping, hunting and being with his family.

Master Sergeant Carl Wood leaves behind family and friends who will love him and cherish his memory for a lifetime. He taught us how to love, live, serve, protect, fight for what is right and cherish everyday to its fullest. First and foremost, he loved his country, and taught us all how to respect and honor the privilege of living in the greatest country in the world. Although he has left this world, his legacy and heroism continues to live on through his memory.
To order memorial trees in memory of Carl Newton Wood, please visit our tree store.