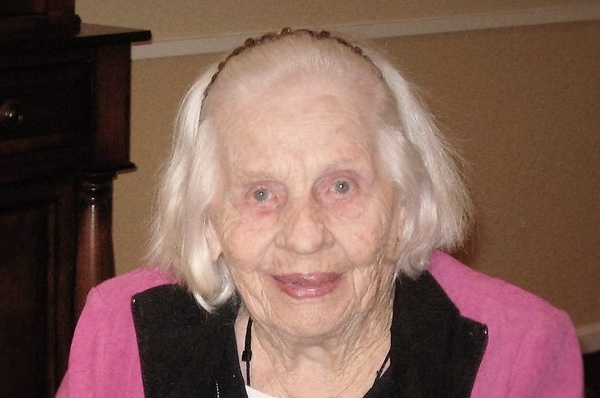 Adeline Mildred (Saar) Sheriff ("Addie") died peacefully in Orangevale, California on July 23, 2016, just seven days shy of her 97th birthday. Thus ended the life journey of a resolute cheerful lady who never let the hardships and heartaches thrown her way keep her down for long. Addie was born July 31,1919 in a farmhouse near Portal, North Dakota; she was the seventh of ten children born to Charles and Marie (Schilke) Saar. There was no doctor present at the birth, only her aunt who acted as a mid-wife. The children were: Hilda, Louise, Lillian, Edith, Mabel,Walter, Adeline, Ruth, Charlotte and Arthur - all born in the same bed in the same house on the homestead Charles Saar settled on in 1900. Addie graduated from Portal High School in 1938, at a time and a place where times were tough. First, there was the financial depression starting in 1929 when the farmers' crops could not be sold for the cost of growing them, followed by the dust bowl years when crops could not even be grown. The result was that there was little money to live on. At age 19 Addie and a cousin drove an old truck to Washington State to find work. She found a job as a cook at a summer camp at Fort Williams and she also found work for her dad. Charles and Marie Saar then auctioned off their belongings, let the farm home of 38 years go to the government for taxes, and moved their family to Washington State to start a new life.
Addie soon fell in love - Unfortunately, it was during World War II and her love was in the Navy. He was deployed to the Pacific to fight and he never came back. After moving to Long Beach in the 1940's, she married Cecil (Ace) Sheriff in 1957. Their son, Lance was born in 1958. Life was beautiful. Again, misfortune happened. Cecil died in 1963 and Addie was left with a house in Long Beach and a five-year­ old son to raise by herself. She persevered alone for another 53 years. She worked at the Petroleum Club in Long Beach for 35 years until she broke her hip when she was 80 years old and was forced to retire. She is remembered at the Club for her cheerfulness and pleasant personality (especially by her friends Leroy Frederick and Stella Kalivas). She greatly enjoyed her home and garden and spent many pleasant hours taking care of them. In 2008 Addie sold her home and moved into an assisted living home in Orangevale, California, to be near two of her nieces, Lois Foster and Connie Gustafson, who helped her manage her affairs. She took leaving a lifetime of friends behind in Long Beach in stride.
Addie immediately began making new friends in her new home. Again, she was known for her cheerfulness and non-complaining manner. Her parents, her brothers and
sisters, her husband and her son all preceded Addie in death. Her many nieces and nephews are left to mourn her. The family would like to sincerely thank the staff at Brookdale Assisted Living for the compassion and care shown to her throughout her stay. A graveside service was held at Green Hills Memorial Park, Holly Section, Rancho Palos Verdes, California, on August 3, 2016.
To order memorial trees in memory of Adeline "Addie" Mildred Sheriff, please visit our tree store.